James E. Allman, Jr.’s credentials—degrees in biology and business—qualify him for an altogether different trade. However, he easily tires of the dissected and austerely economized. He is a dabbler with an expensive photography-habit and a poetry-dependency. Nominated for three Pushcart Prizes, his work appears, or is forthcoming, in ‘Black Warrior Review’, ‘The Literary Review’, ‘Nimrod’, ‘Phoebe’, ‘Prairie Schooner’, ‘Sugar House Review’, and ‘Third Coast’, among others. He’s written reviews for ‘Rattle’ as well as other journals, blogs and sundries and is the co-founder of an artist community called Continuum.

While reading Luke 6, a passage contrasting the poor who are blessed versus the powerful who have already received their blessing (a passage given to me to explore the notion of biblical justice), I was struck by the phrase, “Blessed are you who weep now.” Almost antiphonal is St. Paul in his description of worship in Romans chapter 12, “mourn with those who mourn.” Over the last few years, I’ve found it starkly revealing how many of us fail to pause and mourn with those who are weeping now. Take those who kneel to decry injustice; or those who riot, now, because we did not listen then; or those who have grown tired of mass shootings; or those who find the separation of children from parents at the border repugnant regardless of legality. Instead, there is ire in the face of their weeping; neglect as they mourn. 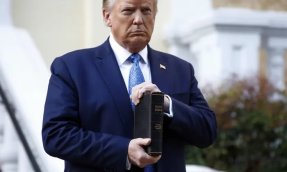 these situations; they use words like ‘law’ and ‘order’. Often we hear responses by them in terms of Romans 13, which tells us all power and authority is from God. From this many take an unfortunate position about political force and therefore justice as a result. The notion is that since power is from God, it follows that justice is the foregone consequence of its use. Another famously quoted passage, when given a coin and asked about taxes, Jesus replied, “Render unto Caesar what is Caesar’s.” (Matthew 22:21) As if tacit support is given to authority to do as it will. Justice is being accomplished, therefore, in detention camps, ICE raids, deployment of the National Guard onto U.S. streets—in the preservation of the status quo. Understanding the source, they say, grants us solace in the execution of political power—trust that since it is from a source, which is God, that it follows as necessarily just.

In a book I recently read contrasting the biblical and ‘worldly’ visions of power, the co-authors press the notion of source a bit further: “As important as our source of power is, we cannot simply ask where power is from. We also have to ask, ‘What is power for?’…The way from above and the way from below are distinguished not only by the source of power, but also by the fruit or results of power. The way from above is power for love.” (Goggin and Strobel, The Way of the Dragon or the Way of the Lamb) No wonder then that Paul follows “If you owe taxes, pay taxes; if revenue, then revenue” (13:7) with the conclusion “Let no debt remain outstanding, except the continuing debt to love…for whoever loves has fulfilled the law.” (13:8) Too similar in language and too close in proximity to believe they are disconnected ideas. Perhaps Paul, having given us ‘source’ is not content to leave it there. Perhaps there are two sides to the coin which was supposed to be rendered—an obverse and a reverse as both sides of a coin are described—and Paul wanting us neither to be blind nor half-blind shows us both.

Which is to say with power, or privilege, there is also responsibility. For “power without love is reckless and abusive;” it is hatred, if you will. (MLK, Jr., A Call to Conscience) As Luke 6:20-22 points out:

“Blessed are you who are poor… who hunger… who weep… who are hated… excluded… insulted… and rejected… for you are like the Son of Man.”

All too close to home especially with the powerful rhetoric we’ve been subjected to of late from the positions of highest authority—the rhetoric that over emphasizes source, that ignores the other side of the coin. Then what is just? As MLK, Jr. goes on, “Power at its best is love, implementing the demands of justice, and justice at its best is love correcting everything that stands against love.” (MLK, Jr., A Call to Conscience) Or as Augustine says:

“What does love look like? It has the hands to help others. It has the feet to hasten to the poor and needy. It has eyes to see misery and want. It has the ears to hear the sighs and sorrows of men. That is what love looks like.”

It is a kind of reconciliation. The word reconcile comes from ‘re’- + ‘concilare’ (to unite in feelings) and gives us conciliate. Which comes from L. ‘concilium’, which gives us council and derives from ‘com-‘, together, + ‘calare’, to call. ‘Calare’ from PIE, ‘*kele-‘, to cry out or to shout. In other words where source and purpose, power and love, and ‘we’ with ‘them’ “cry out together.” Can we cry out together from our place of power with those hurt by it—perhaps even in protest with them?

What, then, as Christians, is our responsibility to law and order—to the preservation and enforcement of political power? Law and order crucified Christ, after all. Even so, Christ came to fulfill the Law that the Law might be fulfilled in us. (Romans 8:4) And the law is fulfilled in this: “You shall love your neighbor as yourself.” (James 2:8; Glatians 5:14; Romans 13:8) It might more accurately be dispensed not through our legal apologia—defending the lawful or prosecuting the unlawful—but far more simply in “mourning with those who mourn.” To turn the coin of power over to find the great reversing power of love. It just might be that Justice is setting aside our sense of justice—reversing power, fighting for those who are hungry and weeping and who are insulted, rejected, and hated by power; that instead of holding them accountable we hold power accountable. How do we know who the rejected are? They are not the ones wielding the law, or touting it; they are the ones crying out because of it. They are our neighbors (as broadly defined as Jesus defines them in the parable of the Good Samaritan), aliens and strangers, who need bandages and salve; who weep now, in response to power executed without the integrating purposes of love…