2017 was supposed to be different. But Robert Burns was right about those best laid schemes of mice and men. I’ve found the last few passes around the sun to be a little bumpy and things have certainly gone awry.

In 2016, ageism and dysfunction — disguised as a reorganization — led to the loss of my position at the church where I was on staff.

Most recently, in 2017, the councilman for whom I’ve been working lost his bid for reelection and now I find myself unexpectedly out of work at the end of the month.

It’s been a rough stretch. Each of the last two January 1’s have started with some degree of optimism for the new year, but each year has seemed to only bring a new rug to pull out from under me. Those with bad theology are wont to believe there is some lurking sin at the cause of such misfortune. I pretty much ignore them because…well, that’s just stupid.

The well-intentioned will tell me everything happens for a reason. Thank God for Christine Suhan. She told us why platitudes never really help the situation and often make one feel worse.  In her article, “Dear Christians, Stop Saying Everything Happens for a Reason,” she wrote, “Sometimes bad things happen for no reason other than we are human beings having a human experience. Pain, heartache, grief, loss, disease and death are inevitable parts of the human experience.” That about sums up the why. Now I’m left with the how and the what:

How will I find a job in less than a week?

How will I pay my bills?

How will I make ends meet?

What if there isn’t a way out this time?

What will I do after I get my last paycheck?

And the all-encompassing question:

What the fuck is happening?

I’m a fairly resilient soul and I typically land on my feet in situations like this. I guess it would just be nice to have a respite from the chaos, but maybe that’s the wrong thing to expect.

Since last year I’ve been learning about and pursuing a more minimal approach to life. Like most people, I used to think minimalism was about not having a lot of stuff. While that may be true for some minimalists — and I hope to be true for me — that is not at the core of minimalist philosophy. Jessica Rose Williams writes, “The beauty of minimalism or having a simpler lifestyle is that we live with more of what makes us truly happy. Imagine what you love doing the most. Now imagine how much more time you’d have to do that if you stopped doing all the stuff you hate, but do anyway.” 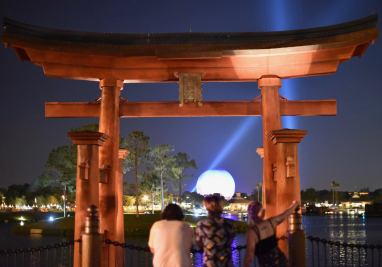 When Disney legend Marty Sklar was promoted to creative leader of Imagineering, the company and the country were at a crossroads. He was tasked with leading his team to execute on Walt Disney’s most ambitious idea ever: Epcot. He motivated the Imagineers with a blank page:

Soon I will be out of work and own nothing substantial to my name (calm down ladies…I know, I’m a catch). The blank page before me is as real as it is proverbial. While it isn’t what I thought I’d be facing at this stage of life, it is nonetheless my reality and no one else can make the first mark but me.

The events of the last few years have been largely out of my control, but with each one — the divorce, the loss of my job at the church, the councilman losing his reelection bid — a little bit more of my previous life has been purged and I find myself in a place of starting over; truly starting over. What happens next is on me and me alone. While I don’t expect to build the next grand theme park, I can, and maybe even must, dream as big.

Experience tells me that in the not too distant future, I’ll look back with utter clarity. My life will be in order. I’ll be back on track.

Until then, it’s time to start writing.