After what had been the worst year of my life to that point, I was looking forward to shaking off the dust from last year’s mess. I had every intention of 2016 redeeming the shit storm that was 2015 and began the year with wide-eyed wonder.

I should have been concerned when, just weeks after 2016 began, David Bowie, Glenn Frey, and Maurice White all died. And with the deaths this week of Carrie Fisher and Debbie Reynolds, I can assure you I will not miss 2016.

I know, I know. Celebrities die every year and more will pass in 2017, but these deaths were particularly difficult. They were icons from significant moments of my life. But just so you don’t think that my attitude is shaped completely by the deaths of cherished musicians and actors, more tragically I also lost a former student at the age of 26 as addictions finally won the battle he had fought for so long.

2016 was also a fail as I watched the unraveling of something that had been a huge part of my life for over two decades. I witnessed the culture of a workplace I love devolve into a shadow of its former self and watched too many people I care about tragically affected by that situation. That led me to decide I could not in good conscience continue to support that organization and I resigned my position.

On top of that I’ve gained more weight than I’m comfortable with and I find that somewhere over the course of the last twelve months I never seemed to hang on to the zeal I had to make 2016 great.

There were some bright spots, like the time I went to Disney World for my first solo vacation or the wedding I had the honor of performing for one of my best friends or forging a new friendship with my Puerto Rican buddies, Ismael and Carmen. But as much as I had committed myself to “choose joy and gratitude and celebration and wonder and curiosity” and to “live life to the fullest and to live it well,” I lost my way.

Earlier this week, my Facebook memories brought up a year old blog post by Donald Miller, “Start Your Life Over.” I read through it again and realized that while my heart had been for making some great choices, I never really mapped out what that would look like. I never had a plan for actually “falling back in love with life.”

So, taking Don’s words to heart, I’ve come up with five things I’m committing to for 2017 that are a response to the five areas he suggests.

First, I’m committing myself to change.

Sounds pretty basic, but I know there have been several times in recent months where I’ve felt that my current situation is my lot in life. This is how things are and I have no way out. I know that my biggest obstacle to change is my own challenge to execute on what I want to do. This year, I’m aiming to overcome that challenge and follow through on what I say I’m going to do.

Second, I’m going to nurture the most important human relationship I have: the one with myself.

I made a few steps in that direction this year, but I didn’t go far enough. I’m an incredibly undisciplined person, which is probably a large part of why I gained so much weight. But 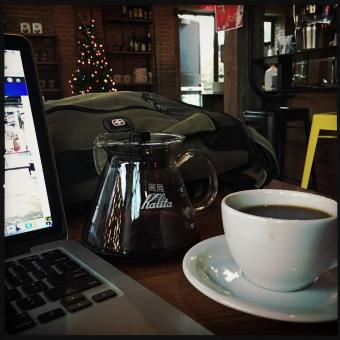 it’s not just about my physical health, it’s also about my relationships with other people and that begins with me.

The reality is I’m kind of an asshole. Now I’m not the kind that has an ongoing capacity for assholery…the kind that just like to watch everything burn around them. I’m just a garden variety asshole. The kind that doesn’t always respond with the grace and kindness and holds grudges now and then. I have to get over this. I need to be more thoughtful in my words and actions toward other people and intentional about extending and seeking forgiveness when wrongs take place.

Third, I need to quit stuff this year.

I spend a lot of time doing things that either bring little value to others or result in little value for myself. I also find that I spend time waiting for things that never come to fruition the way I hope they will. I need to cut that out.

For example, there are some relationships to which I give an inordinate amount of energy. I reach out, wait, reach out again, wait some more, all the while giving less energy to those relationships that are truly life-giving. I need to quit that, along with a few other things that are keeping me from my best life possible. I need to give myself permission to quit things.

Fourth, I need to spend more time with my tribe.

Miller states what we’ve heard from our parents and mentors so many times: We become like the people we surround ourselves with. I’ve done a pretty good job of surrounding myself with people I respect, who have qualities that I desire to emulate, and who are all around great human beings. I just need to be around them more. 2017 will be the year I become more protective of those relationships and more deliberate in nurturing them.

The last thing is the most challenging. Don’s post asserts that most people only accomplish three big things in a year’s time. What will be my three? At the end of December 2017 I want these three things to be true:

3 thoughts on “The Year of Starting Over”