I’ll never forget the day Corey Winfield told me he was leaving the staff of the church where we both worked. He sat in my office explaining what he sensed was a clear

path for him to move his family to Colorado. The announcement of his departure was a surprise. Corey is one of those rare individuals whose job description on paper did not come close to the role he played in our organization. No doubt the church would find someone else to lead worship, but no one could ever replace the impact Corey had on the culture of the organization.

As we talked and he shared how he arrived at his decision, he made one statement that stood out. It has stayed with me in the two years since he first spoke the words to me:

My friend Brian recently posted a question on Facebook. He asked what the future held for Christianity in America. I predicted the corporate models of megachurches will continue to thrive. But in the process, an interest in theology among attenders will take a back seat to other priorities. This shift in emphasis will not be the result of shallow doctrine but a result of competing issues.

The local megachurch will continue an intense focus on the image of its staff, presentation, self-preservation, and strategic initiatives. After this, any effort toward theological instruction will become, at best, one of several equally important concerns or, at worst, lost in the noise of pressing matters. People will keep attending because it makes them feel good and for many it is their primary (and for some their only) social outlet. It won’t be much different from what drives people to any other form of entertainment or community. (For a great read on this dilemma and how it is expressed in the Contemporary Christian Music market, see Brant Hansen’s piece for The Washington Post)

Believers desiring something beyond feeling good, however, will become increasingly disenfranchised with this model and become less committed to attending the weekly event. In line with our increasing DIY culture, people will be more more inclined to experience life in community with other believers in more organic and less structured, less strategic forms.

The problem is this. The Bible does not prescribe a particular form the local church should take. Kenny Burchard makes this point in a blog post, writing, “… there is not one single model of how to govern a church that is static in the New Testament. There are just lots of examples of how early Christians got things done.”

I’ve heard countless preachers deliver sermons based on a passage from Hebrews, a book in the New Testament of the Bible, to argue for the necessity of attending a local church:

“And let us take thought of how to spur one another on to love and good works, not abandoning our own meetings, as some are in the habit of doing, but encouraging each other, and even more so because you see the day drawing near.” Hebrews 10.24-25 (NET)

The thing is, nowhere in that statement does the writer direct a believer of Jesus to take part in the specific form of meeting for an hour every weekend. What he does say is that we

need to not abandon meeting together. That can take on many forms, but keep in mind that when this was written, denominations and megachurches did not exist. What did exist were communities of believers in cities throughout the middle eastern region serving each other, encouraging one another, praying together, and experiencing life as followers of Jesus.

Since the day Constantine legitimized the Christian faith and the local church emerged as an “official” organization, it has faced a tremendous challenge. This is especially true in a western culture heavily influenced by capitalism and an entrepreneurial spirit. Whenever we join a secular corporate model with a spiritually-oriented endeavor there will, at some point, be compromises necessitated by that union. Throw into the mix an organization led by flawed human beings and you have a complex and challenging task that ultimately has to have self-preservation near the top of its priorities if it is to sustain its existence.

Of course the local church will still have redemptive value. The best of these organizations will seek to serve its people and the community. But for even the best among them and because of the model most churches choose to follow, there will always be a cost and part of that cost often runs in the thousands and sometimes millions of dollars, largely to pay salaries, maintain facilities and equipment, subsidize employee health insurance and other benefits, not to mention the other expenses of managing human capital and all the other expenses typically associated with operating a business.

At some point during the recent changes in my life, all of these realities came to a head and I had to ask myself some hard questions. What if I had not spent most of my professional life as a member of a church staff? Would I have been any less devoted to my faith? Would I have been any less active in telling others about my perspective on spirituality? Would my family life have suffered as it did had I not been a “professional” minister?

Most who serve on the staff of a local church do not become rich, but they do enjoy a decent living and more flexibility with their time than most organizations give them. Which brings me to a question worth considering: Would

those serving on the staff of a local church enjoy the same lifestyle afforded by the work dynamic of the typical church environment if they had to find work elsewhere in the marketplace?

As a young seminarian in the fall of 1994, I sat in an orientation and listened, eager to discover what lie ahead. Storied professor Howard Hendricks challenged us as we began our theological education. His warning was sobering:

“Be careful ladies and gentlemen, for ministry is a powerful mistress.”

My friend Amanda once said her relationship with her church was like having a bad boyfriend. Like the person who remains in a toxic relationship, I’ve been in an admittedly dysfunctional affair with the church for some time now. This dynamic has troubled me for years, but closure appears on the horizon.

Somewhere along the way the mistress, along with my own insecurities and need for acceptance, seduced me. I cheated on the Church with the church and I lost more than a little of my soul. But, as Hendricks’ words were the inception of one part of my journey, the words of pastor Craig Groeschel begin this next season:

As long as I have life in me, I will spend the rest of my days rediscovering and reclaiming what I’ve lost in my misplaced pursuit of wanting to make a difference. The pursuit was right, but the vehicle was flawed.

If the church was outlawed today, would the Church cease to exist?

The answer is, “no,” because, you see, the church and the Church refer to two different things.

The church exists in a variety of expressions. Those expressions change with the whims of society and shifts of culture. Some are driven by age-old traditions and hierarchies, others by the personalities of leaders enamored with the latest research on societal trends. Some are good, others not so much. (for an outstanding analysis of how we came to have so many different Christian denominations, see Stacy Tyson’s study, “A House Divided“)

The Church, however, transcends culture shifts, personalities, org charts, and strategic initiatives. The Church cannot be outlawed, destroyed, or boxed in by the latest business model or piece of legislation. The Church is not defined by whatever generation is currently being analyzed and dissected by marketing firms. The Church is all of God’s people, everywhere, for all time.

I’m not saying everyone should jump ship from the local church. If you’re inclined to spend an hour in a church service every weekend with others who enjoy it and your spiritual growth is absolutely dependent on that hour, then pick a form you like 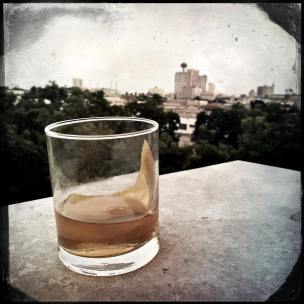 and throw yourself into it. Just don’t forget that the church is no substitute for the Church.

In the days immediately following my departure from the staff of the last church for which I worked, I had the chance to speak with my friend Corey again. I reminded him of his “for but not with” comment and how that kept repeating in my thoughts. He affirmed it was time for me to move on. Truth be told, I may have stayed longer than I should have.

For a period that lasted far too long I was involved in a torrid and virulent love affair with the church. It consumed me in ways that I have to admit are embarrassing. Through that process I’ve rediscovered my love for the Church. I’ve decided I need to spend time just being a person who loves God and loves people. I read once that if I just get those two things right – loving God and loving people – then everything else will fall into place.

7 thoughts on “For but Not With: The End of My Love Affair with the church”