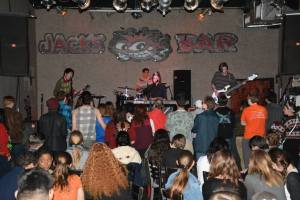 Someone once asked Charles Bukowski what his creative process was. Flying in the face of conventional wisdom he replied, “You don’t try. That’s very important: ‘not’ to try, either for Cadillacs, creation or immortality. You wait, and if nothing happens, you wait some more. It’s like a bug high on the wall. You wait for it to come to you.”

We can debate all day what Bukowski meant. I don’t think he was arguing for any sort of lazy approach to creativity. My take is that he was arguing less for passivity and more for not trying to fabricate inspiration. Inspiration is a gut-level reaction to an experience. The more you chase after it, the more elusive it becomes.

I’ve spent a lot of years striving, reaching, chasing. Like trying to find the end of a rainbow, it always seemed as though whatever I was after was never to be captured. Lately it’s been different.

Anything related to creative expression has always drawn me in like nothing else can. Film, theater, writing, and, yes, music, have all been things that have captured my imagination and spurred on varied attempts — feeble though they have been — of my own. Over the last eighteen months, I’ve “not tried” to manage a local San Antonio band. What I’m discovering is that in the “not trying” I’m finding inspiration, joy, wonder, diversity, grace, and even community.

Another Christmas and new year approaches. This is a good time for me to say, “Thank you.” Thank you to the artists (and it’s important to note that you don’t have to plug an instrument in and stand on a stage to be an artist) I have met over the last year that have inspired me and shown me that what I’ve been looking for hasn’t been wrong. I’ve just been looking for it in the wrong places.

For each of the names that follow, thank you for making my life richer. As I began to write down these names I realized that I did not know most of these people a year ago. They are the most creative, quirky, angry, joyful, wondrous, gracious people I know. In all of their diverse genres and expressions, what binds them together is a common passion for our creative community. Thank you all for what you do. You spend countless hours rehearsing, promoting, engaging, creating, performing…working, because you have a dream that’s been put in your heart and you want others to know about it.

Many of the names that follow are not just people I know in our local tribe of artists, but are people that I’m blessed to call friends.

It would be wrong for me to not thank first my resident musicians and their Octa-mates, Ruben, Elena, Austin and Daniel. But in addition to them:

Thank you for inspiring hope and enriching not only my life but the life of my family. You are opening my mind and my heart to the potential of the arts. You are amazing.

One thought on “What happened when I didn’t try…”