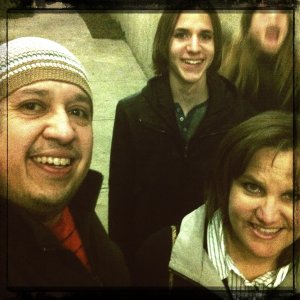 It’s no secret to anyone that knows me that I’m a big fan of Don Miller. I say that because so much of what follows has been heavily influenced by his writing.

So, my family and I spent some time downtown Tuesday evening. After a great meal at La Gloria, we took a stroll down the Riverwalk.

If you’ve never been to San Antonio, you really need to come visit. The Riverwalk is a great place, especially during the holidays (don’t listen to anything Mark Cuban has to say about it). There’s nothing like strolling along the meandering urban path during the cooler evenings and enjoying the lights and energy surrounding our city during this time of year. If you’re ever here on a Tuesday evening, you have to make a point of stopping by the San Antonio Museum of Art. SAMA has free admission from 4-9PM on Tuesdays and it’s a great place to hang out.

As the four of us strolled alongside the river I asked everyone if they were satisfied with the story their life was telling individually and with the story our family was telling collectively. There were varied responses from “I don’t know” to “It could be better.” My challenge to us came in the form of a question: “What’s stopping the better story from coming out?”

The answer, really, is simple enough. It’s us. We are the only thing keeping the better story from being told. So, I laid down the gauntlet for Casa de Lopez. I said to figure out what story you want your life to tell and go out and tell it.

My daughter said that would mean that she has to move to Morocco. My response?

I’m currently engaged in a writing project with my dear friend, Shawn Richard. We’re working on a screenplay and are working hard to tell what we believe will be a compelling story. I’ve had this idea in my head for years now, but it took linking arms with my friend who shared a passion for storytelling to actually get this thing going. Where it will end up is anybody’s guess, but the great moments of this process is where the real story is found.

I don’t know if Elena will make it to Morocco or not. That’s not really the point of the story her life will tell. The really compelling stuff will come in her journey toward her goal. The destination may or may not remain the same, but the chapters of her life between here and there are something I can’t wait to see. It’s going to be great reading.

So, what’s your story?